You'll find me in the gallery 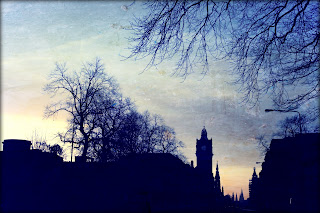 This city is alive with art. This week many galleries were visited. So much art was seen on one day that it honestly might be a bit of a blur. I'll take a feast of art over a famine any day. This week I will try to record some of the art I saw as well as some of my impressions of it.

Let's start with Royal Scottish Academy, where I saw the work of Sylvia Wishart. The Royal Scottish Academy is an impressive building and I would be more inclined to call it a museum rather than gallery, but that practice doesn't seem as popular over here. It has exhibitions that change out regularly. We happened to catch the paintings of Scottish artist Sylvia Wishart. These were mostly landscape paintings and a ship seemed ever present somewhere in the imagery. I like ships. I like paintings. Sylvia's paintings were in a palette that felt a bit anemic. Her paintings felt more like unfinished under paintings, the colors cold and bleached out, left me wanting more. Without either color or form to grip us, we walked through this exhibition with speed.

As we were in the neighborhood, we decided a return visit to the Scottish National Gallery was in order, if you recall from last week's blog, this is where I saw a wide selection of paintings, from Rembrandt to Gauguin and all shades in between. The Turner water colors are currently on display there as well,  but what gripped me the most were two works from the Scottish section of the exhibition in the basement of the gallery, the four panelled textile piece by Phoebe Anna Traquair was enjoyed even more the second time and this time the book about the artist was even purchased from the gift shop. The more I learn about Phoebe the more fascinating she and her work become. The other piece that had to be savored again was, Saint Bride by John Duncan, the delicate colors, the ethereal glow, the gentleness of the way the body is carried and the hands are laid, the tilt of the head. This painting is beauty personified. This is a work that has the power to make me almost weep at how perfectly everything has been executed.

Then there was a visit to the Talbot Rice Gallery, the exhibition Beholder was currently on display. I was very pleased to see a sweet still life by Morandi in the mix. It was surprising to find it there in the crush of contemporary and sometimes conceptual art. There was also a piece there by Yoko Ono. I think the highlight of Yoko's piece was the room that it was placed in. The spaces these works are shown in contribute so much at times to the work, but I am a sucker for architecture. The Talbot Rice Gallery consists of two unique showing spaces. The White gallery is just that, a white and bright open room while the Georgian gallery is ornate and over the top. It was interesting to walk into the neoclassical space and be treated to a selection of avant-garde art films in the dark. After walking through the films we found our way to a very old spiral staircase that took us up to the darkened mezzanine level. There we browsed some works from The University's Torrie collection, a bequest to the University of predominantly seventeenth century Dutch paintings.

From there we decided to visit a few commercial art galleries along Dundas street. The first stop was The Scottish Gallery, where we stumbled upon a brilliant exhibition of the work of William Johnstone, the Scottish father of modern abstract painting. The gallery had a varied collection of his works, a retrospective. I was inspired by the loose sumi type ink paintings as the colors of red and green mingled with the jet black. The Scottish Gallery was a lovely space and I felt quite comfortable in this high end gallery. It was good to see this important work and learn more about the roots of Scottish abstraction.

We also popped into the Di Rollo  and Edinburgh galleries. These galleries were smaller and had a wider variety of styles and works. There was one artist that caught my eye in the Edinbugh gallery and that was George Grant. He had three pieces on display. I liked the surface he was working on and the blurry atmospheric work he creates. It may have even remind me a little of my dark landscape series from 2004.  Both of these galleries were nice and the friendly and eclectic Di Rollo had a lovely view out the back window that made me want to curl up like a cat in the window seat and sleep.

Last but not least, we saw an exhibition of impossible Polaroids by artist and writer Ever Dundas. The exhibition, And this is Yesterday, was in a stairwell and as you took a step up, you took a step into the worlds captured in these little photographic stills. Influenced by music, Ever's work had a nostalgic feeling of warm days past. It was a lovely exhibition and it was great to meet the artist as well.

So there you have it. There is art all around me. In this grey statuesque city, the sun shines more often than I expected...
Posted by Megan Chapman at 12:31 PM

Megan Chapman
An abstract painter for over the past twenty years, my work is an intuitive, visual diary of my interior language. The foundation of my work is in the balancing of shape and line with color, texture, and atmosphere. I enjoy creating meditative places to get lost in, as well as dynamic spaces to explore relationships — such as how we dance between our inner and outer selves and each other. My work uses color to explore our connection to the world as we navigate the push and pull of life. My paintings are in collections throughout the United States, Europe, Canada, and Australia. I was born and raised in Fayetteville Arkansas, earned a BFA with honors in painting from the University of Oregon, and currently live and work in Edinburgh, Scotland.